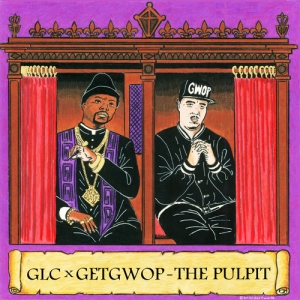 GLC is on a great run, when he dropped a collaborative mixtape (The Pulpit) with Get Gwop a little while ago, the only negative I could think of was the presence of an MC I was unfamiliar with. After all does GLC need anyone else in his sonic universe? He invites everyone to guest on posse tracks but I’m not sure anyone has a more self contained sound. He wouldn’t seem to need a partner. Other mysteries persist regarding this track, I’m not sure whether the producer is well known beatsmith Cardo…deciding to add wings or if this is someone altogether different. The sound could certainly be mistaken for Cardo, the well known synthetic burps abound, but the hook is one thousand percent GLC: catchy, ridiculous, sing-a-long perfect and all street life. While The Pulpit didn’t turn out to be the cohesive romping session I had hoped for it has jams riddled all through it. This is by far the most irresistible and Get Gwop holds up his verse quite well. I get the definite feeling that this is a toe in the water and the big GLC splash will come later in the year and be as pleasurable as any of us can hope for.