Mixtape Review-Good Day in The Ghetto by ST 2 Lettaz 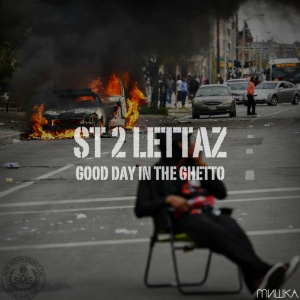 Mixtape Review-Good Day in The Ghetto by ST 2 Lettaz

This project is different. It isn’t just that it features an all-star guest line up (Migos, Stalley, Mic Strange). On Good Day he rhymes “banging my old lady buck nekkid on top of them polo sheets” with “four more weeks til my n_ free” then he thinks about drugs then he thinks about how his friend had a kid and he has no time to visit. The imagery is much more potent and assertive than it ever has been.

My mind kept conjuring images of ST as the old NBA superstar who would not be vanquished. The years turned him into Hakeem Olajuwon circa 1994, 95 and David Robinson wasn’t going to stand in the way. Block Beattaz has a lot to do with this feeling as well; the beats are sweeping and cinematic. Skwad is the second best song out of the nine and it manages to navigate between desperate and confident. The insular me against the world-ness comes together with the gunshots and the screaming to create the most violently militant moment in recent G-Side history. By contrast, the best song is Lazy Afternoon which has the Cindy Crawford of bass lines (gorgeous) and a muted repeating soul sample that’s positively hypnotic. ST takes you through it, riding and smoking while expounding on music as therapy, death as an eventuality and a reality. The whole time I’m just thankful none of those big name guests jumped on this. Lazy Afternoon is a beat only a handful of MC’s could have properly managed and ST is one of them(and yes this song culminates in an interlude about ass licking but this is rap music kids get used to it).

None of these songs feature ST looking up at the upper tier of rap and asking why he isn’t there. Songs like Quit Ramblin’ or Richard Pryor are smash mouth beats that ST just throws bar after bar at. Not rapping like a man who wants the spotlight but as a man who has it. Nightmare on 9th Street is all claustrophobic street venom “…double bagging that dope, tryin’ to kill the smell. Ain’t nobody crossed me…and lived to tell.” Is this a new direction? I don’t think rap has many new directions for someone whose done as much and been around as long as 2 Lettaz.

What’s new is the determination in his voice; the echoing reverberation of each powerful stomped word accentuation. Everyone used to write G-Side reviews saying “these guys are good but these beats are great”. He’s at the point where he steps in the booth and knows that he’s going to outrap everyone. As great as the Migos feature is, as snarling as Mic Strange is, and as surprisingly plugged in as Stalley sounds…none of these cats are rapping like 2 Lettaz. Its nine songs and every single one is ferocious. It could have been double this size and still wouldn’t have any fat on it. That’s just how it is when ST touches the ball these days. He’s all net.

Stream or download Good Day in The Ghetto below: