Joe Budden was blowing his top. The legendary Eminem rant (on Buddens podcast) where he talked about how closed off he was and all the other things that went wrong with Slaughterhouse. He did an excellent job not taking responsibility. The most interesting part was when he indicted Shady Records of taking the wind out of the sails of the Griselda crew. He said they were coming up at a great clip and since signing to Shady hadn’t been heard from. I can’t lie, it worried me. He’s not wrong that Eminem loves to sign top lyricists and let them sit.

Budden’s argument was missing a key piece. 50 Cent did pretty well on Shady, and Griselda have absolutely SMASHED 2019. They are hands down the 2019 FME MVP. The trio came to Shady with a plan. This year they worked out a timeline and flooded the streaming services with new releases.

Take a look at my dope @$$ Griselda release graphic: 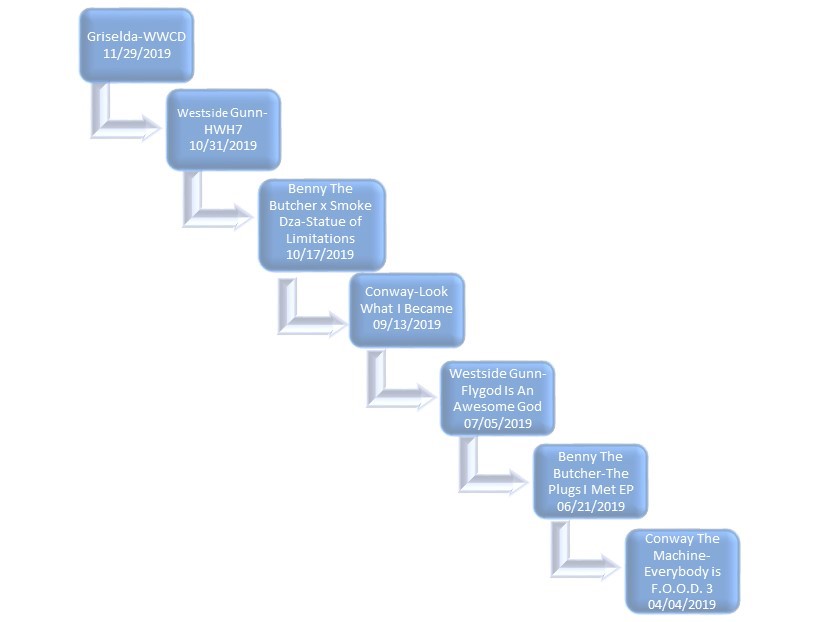 This crew consists of three primary members: Conway The Machine, Westside Gunn, and Benny The Butcher. An argument can be made that New York producer Daringer is enough of the secret sauce to be considered a member. Amongst the key three emcees’ they put out a total of 7 projects in the calendar year. Out of the twelve months in 2019 only six didn’t feature a new release from one of the Griselda crew.  It’s been an unprecedented load of material and all of it at a very high level. A level that never strayed from their core design no matter how it extended itself or how much money betraying it might add.

Benny The Butcher did an EP with the greatest guest list of the year. Right after the intro skit you hear him next to Black Thought. Next song Jadakiss, and closing out the project with Pusha T’s second best guest appearance of 2019 on 18 Wheeler. No matter who was with him Benny blew like Sonny Rollins on the Sax, whether Conway or Eminem was coming on next…it didn’t matter. The Butcher has a gift and no fear.

Conway The Machine’s Everybody Is Food 3 is the opposite in some ways. It only features one guest rapper (Berner) and is highly personal in content. In 2012 Conway was shot in the back of the head leaving him with Bells Palsy. When he gets personal or angry or really anything it is INTENSE. Look What I Became continued the introspection but made room for the crew to feature and go full NY goon rap knucklehead. Conway went beyond skill this year ,into himself, with rewarding results.

Westside Gunn is one of the top rappers in the world. Full stop. Flygod Is An Awesome God is one of the best albums of the year.  His follow up Hitler Wears Hermes 7 has better production and is somehow more fun to listen to! His energy is so intense that when he jumps on FME 2018 MVP Roc Marciano’s song Boosie Fade (off his excellent new album Marcielago) Genius has three question marks(one of those question marks covers like three bars) in their transcription of his lyrics. He comes in HOT every time and it is always worth it.

All year the crew was playing chess with these releases and WWCD(What Would ChineGunn Do) was the checkmate maneuver. All year I anticipated their large scale pop friendly turn as the anticipation built. Everyone talks about making SUMMER music or SUMMER anthems. What that really translates to is declaring you make enormous hit singles to flood the radio. For some people that’s natural(Wiz comes to mind) but most are reaching for another tax bracket. The crew from Buffalo completely dismissed this or may not have even thought of it. WWCD is ice cold. When it dropped I told everyone it is WINTER music. Cruiser Weight Coke, Freddie Hot Spot are songs you can hear your breath too. I’m not the only one who knows. I can hear it in Raekwon as he does the Marchello album introduction. I listened to Wu-Tang in my friends’ cold basement, in ratty jeans and Shaq 95’s. The remorse, the anger, the vision all found their way into one another on every verse. As Raekwon Told them “they covered a lot of ground” and they are his heart…I believed him. They gave us a years worth of twisted soul samples and dark piano loops with rarely a hook to be seen. Verse after verse after verse. 50 Cent features and so does Eminem but nothing changes because of that. I was already debating their top spot when I saw this video of them playing the album for Jay.

As a hip hop fan I feel like I’ve watched multiple Jay-z documentaries multiple times and I know that face. I know Jay’s face when he’s connecting to something special. He can’t fake that screwface. I know what his mug looks like when he’s just there to be nice(Jay recently dropped his 2019 playlist and had some WWCD on it). This year Griselda didn’t take the charts but they took New York and with it a following that might or might not translate to great reviews or world takeover status.  It earned them 2019 FREEMUSICEMPIRE MVP.

Joe Budden made the mistake of discounting how hungry Griselda is. No matter what label they ended up on, they were going to be heard. No back up plan.

Like Loading…
← FME MVP HONORABLE MENTION
→ Rap Radar Podcast can teach you how a song gets made.